From Bulldog to Army Sergeant: A Life of Service

Tennessee Wesleyan believes in developing servant leaders. And if there’s one place we can look as the model for servant leadership, it’s our U.S. military. The men and women of our Armed Forces serve their country each day, and that is why Tennessee Wesleyan created the Veteran Student Services office, to serve those men and women who have served us. TWU supports these Veterans as they make their journey into higher education or adjust back into civilian life. 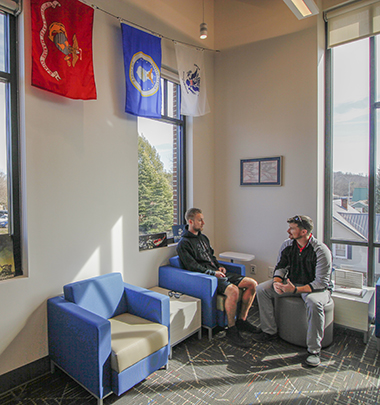 Will Nation (seated right) serves TWU as the Coordinator of Veterans Services, as well as a Success Coach. Himself a Veteran of more than 15 years in the U.S. Army, Nation spends his time serving and supporting the Veterans on campus. In addition to his support, Nation’s role with Veteran Services is the certification of GI Bill benefits. With his similar background, Will shares common ground and experiences with our Veteran students.

“Sometimes these students are more comfortable sharing some of their frustrations and questions with me because we have more of a common background,” said Nation about his role. “I want to find ways to help our Veterans and service members to get involved and to truly be a part of campus and our community, but primarily, I just want to be here to support and to advocate for them.”

Although the Veteran Student Services Office was not a part of TWU at the time, one former student Nation has been in contact with is Army Sergeant Victor Black. Black is a 2012 graduate of Tennessee Wesleyan College, where he studied criminal justice, was a member of the TWC lacrosse team, and a member of Fellowship of Christian Athletes. 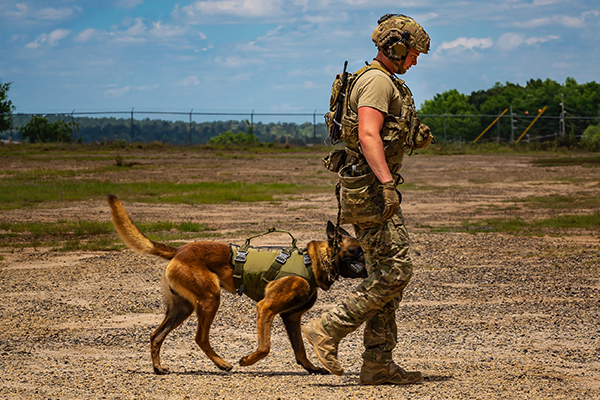 “I have talked to Will off and on for the last few years. I hope that the office helps those Veterans who are currently enrolled (at TWU) by helping them adjust back to civilian life,” said Black.

Another mentor that Black had while at TWU was his lacrosse coach, Kevin Parker. Black played lacrosse from his sophomore year until he graduated in 2012.

“My mentor was definitely my lacrosse coach, Kevin Parker. He was my lacrosse coach from my sophomore year until I graduated, and I am still in close contact with him to this day,” added Black. “If it wasn’t for lacrosse, I would’ve never come to Wesleyan, but I came on a visit and really liked the feeling of closeness between everyone.”

Victor always wanted to enlist in the military. His dad was a part of the U.S. Navy. As a child he always enjoyed being outside and playing in the woods. At an early age the idea of fighting for something he believed in was something Black loved. He enlisted in February of his senior year and did a delayed enlistment, so that he could finish his degree.

In August, he left for basic training at Fort Benning in Georgia. While in basic training, Black graduated as the honor grad and then went on to complete Airborne School, Ranger Assessment and Selection Process (RASP), and Ranger School. He is currently in the 75th Ranger Regiment as a dog handler. 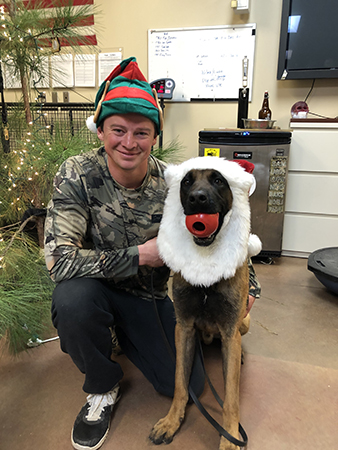 On Monday, Wednesday, and Friday, Black runs approximately three miles with his dog Rico. On Tuesday and Thursday, Black and his dog play fetch, and afterwards Black starts his training. Their training exercises consists of finding bombs, bite work, or other military operations.

“For example, we will hide a bomb in an open area, on a road, or even in a building, and the dogs will have to find it. Some of the military operation training will consist of riding in helicopters and doing mock missions; sometimes meaning we are out from 9pm-5am,” stated Black.

Victor has been deployed six times. Three of his deployments have been to Afghanistan, and the other three have been to Syria.

“You learn a lot about the world we live in and how lucky we are to live in the United States when you are deployed in countries like these. It is a great learning experience, and you take a lot away from what you learn while on deployment,” said Black.

The Veteran Student Lounge is located upstairs in the Colloms Campus Center. It includes coffee, snacks, couches, TV, and is your place to relax, prepare for class, or gather and provide support and mentoring for one another.