From Bulldog to Entrepreneur: Ideas Coming to Life

Being a student athlete is challenging. Trying to balance academics and studying around games, practices, and traveling is difficult. There must be clear communication between the athlete and his or her professors. For Chattanooga native, Quadarius Cox (QD), this was no different.

QD transferred from Cleveland State to Tennessee Wesleyan to play basketball and further his education. Because QD was recruited by TWU out of high school, he had already built a strong relationship with coach Ray Stone. 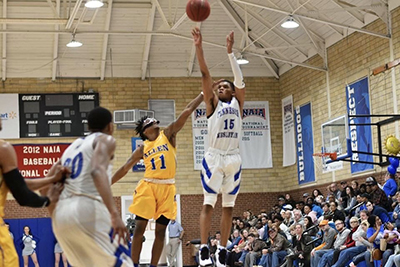 “I chose TWU because of my relationship with Coach Stone, and I knew other ball players that played for Wesleyan. I also believed that Wesleyan would put me in the best position to succeed academically,” said Cox.

Cox played basketball at Wesleyan for the next three years. His senior year he averaged 14.7 points per game, second most on the team, while also being one of the more efficient shooters; QD shot 39% from behind the three-point line and 82% from the free throw line. Not only was QD determined and a hard worker on the court, but he also strove to succeed in the classroom.

Cox was a Business Marketing major with minors in Communications and Entrepreneurship. He attended Phi Beta Lambda, business organization that prepares students for future employment. Through this, he learned how to be a leader, the importance of developing people skills, and discipline. Over his three years at Wesleyan, QD built strong relationships with his professors.

“I appreciate each professor I had at Wesleyan, but I have to send special thank you message to Stacy Swafford, Anne Montgomery, and Ron Gilbert. They, and coach Stone, played a huge role in my maturity and taught me ideas that I can take with me forever,” said Cox.

Since graduating in 2019, QD has become a management assistant at Enterprise Rent a Car in Chattanooga and uses the tools Wesleyan taught him every day. He assists in the operations and decision making for the company; QD is also responsible for mentoring, teaching leadership, and training new employees during the on-boarding process.

In addition to working for Enterprise, QD is pursuing personal ventures such as “Save a Sole.” Cox is in the process of starting this non-profit business; “Save a Sole” is centered around providing lightly worn sneakers and forms of mentorship to youth of all ages.

“My goal is to help increase confidence in students who may not be able to afford ‘cool sneakers’ while also mentoring them through life,” said Cox.

The idea for “Save a Sole” and Cox’s other personal ventures came to life while he was at TWU. Montgomery teaches an entrepreneurship course, and through the course, Cox learned how to create a business plan that will help start his non-profit. Cox’s dream job is to be able to run “Save a Sole” full time while pursuing other personal ventures as well.

“Even three years later, I still look back and use the presentation that I created during my undergrad. Anne Montgomery helped me tremendously with bringing my non-profit to life,” said the 2019 graduate.

Although at times difficult, Cox enjoyed being a student athlete. He enjoyed staying up late and playing Madden with his teammate Aundre Reid, playing in front of TWU’s fans, and learning about how to start his own business.

“One of my favorite things about Wesleyan was creating this brotherhood with the basketball team and all of the other relationships I built,” said Cox. “My advice to the athletes coming to play for Wesleyan would be to have a sense of pride when playing, remember the end goal is to graduate, and to take advantage of all of your resources.”