From Bulldog to Physical Therapist: Finding a Career Through Adversity

In life, things do not always go according to your plans.

In 2009, Joshua Bolton came to Tennessee Wesleyan on a baseball scholarship and planned to major in pre-med. The first two years for Bolton in college were normal; Bolton played baseball, was a member of Fellowship of Christian Athletes (FCA), and like many college students, even changed his major to education.

But in 2011, things changed when Bolton injured his shoulder by tearing his labrum. This wasn’t in the plans. 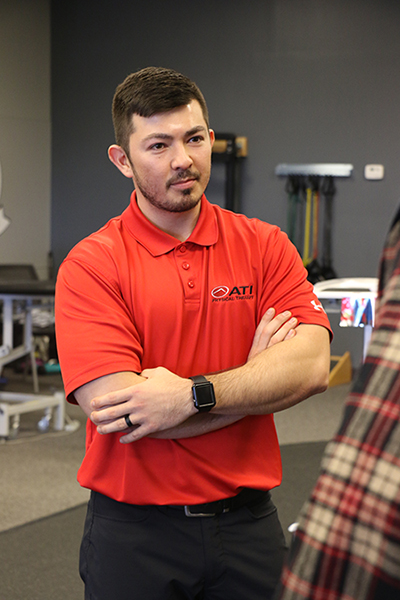 It would have been easy for Bolton to look at his injury and let it negatively affect his life. With the injury in 2011, he had to sit out for the 2012 season. During that season, as Bolton had surgery and began physical therapy, Tennessee Wesleyan reached the pinnacle of NAIA baseball, winning the NAIA World Series in Lewiston, Idaho.

“It took me about 10 months from surgery to starting to play again at the level I was comfortable with. I still wasn’t all the way there, but just to be back on the diamond was nice. It was cool to see the beginning from where I started to then getting back to playing at that level,” said Bolton.

Bolton was naturally a shortstop, but after his surgery and rehab, he lost some strength in his throwing arm. With the similarities in position, Bolton made the transition over to second base; he worked on his arm mechanics and was the Bulldogs second baseman during his senior season in 2013.

Not only did physical therapy help Bolton get back to playing the game he loved, but it also showed him the career path he wanted to pursue.

After his experience in surgery and rehab, Bolton changed his major to physical therapy, thanks to his own physical therapy experience. While doing physical therapy it helped him stay around athletes and sports. Changing his major a second time delayed Bolton from graduating on time, but with summer courses and lots of observation hours, Bolton was able to graduate from TWU in 2014, just a year later than expected.

Upon graduating, Bolton joined the physical therapy assistant program at Chattanooga State Community College. His first year in the program dealt with medical terminology and lots of time in his books. During his last year in the program, he was able to spend more time in learning the lifestyle in clinics, giving presentations, writing papers, and reviewing for his board exams. Bolton’s time at Wesleyan made the transition to his physical therapy assistant program easier.

“Enjoying the student life and just being in communication with everyone, sports, and my classes helped me a ton going into school at Chattanooga State. It made that transition easier because I already knew all that (material) going in. I didn’t have to start over,” stated Bolton.

After graduating from Chattanooga State, Bolton accepted a job at ATI Physical Therapy locally in Athens. He is about to go into his sixth year at ATI and loves what he does. Bolton’s co-workers enjoy working alongside him.

“Josh has been a huge asset. He’s hardworking and has done an amazing job keeping our clinic in Athens running smoothly. It’s one of our busiest clinics and doesn’t even have a full-time therapist; Josh is running the show! If Josh is an example of what we can expect from a TWU grad, we’d be happy to have more students from there,” said Corrie Large, Bolton’s co-worker.

Bolton sees a variety of patients and injuries at ATI; however, he hasn’t had the chance to work with any TWU athletes.

“I haven’t been able to work with any. Wesleyan has great trainers, so I’m sure they see a ton of them. That’s kind of like my bread and butter. I enjoy working with athletes, regardless of their injury or what they are here for,” said Bolton. 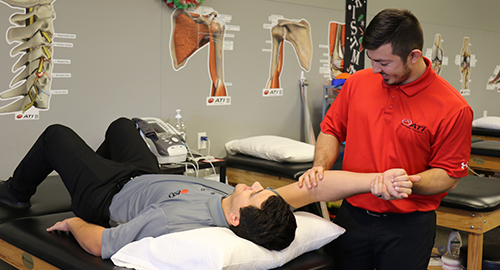 As a former athlete who has been through physical therapy himself, as well as the mental aspect of not knowing how he’d be able to recover and play, Bolton really connects with his patients, especially athletes. His co-workers have seen first-hand the connection Bolton makes with his patients.

“He relates to his patients really well. I think he has a great rapport with them. He’s great to work with, very professional, and brings a lot of energy to the workplace,” said Susie Labovich, Bolton’s co-worker.

As Dr. Martin Luther King Jr. said, “If you can’t fly, then run. If you can’t run, then walk. If you can’t walk, then crawl. But whatever you do, you have to keep moving forward.”

Despite the adversity of injury, Bolton kept moving forward. He didn’t look at his injury in a negative light. Instead, his experience sparked his interest in the medical field once again. From that point, he was motivated to help others through what he once went through.